Florida has some of the toughest drug crime laws and penalties in the nation. If convicted, you may face a mandatory-minimum prison sentence, steep fines and a criminal record. Whether you have been charged with any of the following drug-related crimes, Thurow Law can provide aggressive defense for any drug crime.

What are Florida Drug Possession Laws?

Under Florida State Laws, the possession of most controlled substances can be charged as a felony. However, the possession of marijuana for medical use is permitted by a doctor’s recommendation. If you are charged with possession with intent to sell, you may face third degree to first degree felony charges.

If your case involves the execution of a search warrant, you need an experienced Pasco County criminal defense lawyer to evaluate the affidavit that was presented to the judge that signed the search warrant. Don’t assume that everything written in police reports and witness statements are true.

Pasco County Attorney Todd Thurow served as a police officer for more than a decade. He participated in many drug and narcotics investigations during his time in law enforcement. Due to his training and experience, Attorney Thurow has an insider’s understanding of how drug crimes are investigated and prosecuted and will utilize that to help your defense. He will evaluate how law enforcement seized the contraband in your case and attempt to get any and all unlawfully obtained evidence suppressed. Suppression of evidence in drug cases commonly results in a dismissal of the charge(s).

Attorney Thurow is familiar with police procedures and is able to identify whether the evidence was obtained illegally. Pushing for a dismissal or a reduction of the charge is always his priority. He never shies away from challenging evidence, the prosecutors, and the police in order to achieve a favorable outcome for his clients.

Contact our drug crime lawyer to learn more about how he can defend you.

Is Drug Possession a Felony in Florida?

In Florida, possession of a controlled dangerous substance (CDS) can be either a misdemeanor or a felony largely depending on the amount and type of drug found in possession. The penalties for felony drug possession depend on the degree that you are facing.

What are the Penalties for Drug Possession in Florida:

Facing Drug Crime Charges? Investigation and Preparation is a Must 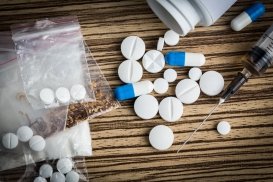 If you have been charged with possession or trafficking in a controlled substance or other drug offense, you need more than a criminal defense attorney who is smart, tenacious, and aggressive. You also need an Dade City drug crime attorney that will investigate your matter and prepare for the legal battle ahead. Attorney Thurow will obtain and review all the evidence in your case.

Thurow Law investigates and prepares all cases as if they are going to trial and will attempt to get any unfavorable evidence suppressed or thrown out. All drug cases are evaluated to determine if a motion to suppress is necessary in an attempt to exclude unlawfully seized evidence.

Thurow Law serves clients all across the west coast of Florida, including but not limited to Pasco County, Hernando County, Hillsborough County, Pinellas County, and Polk County.

Charged with possession or trafficking of a controlled substance? Call (352) 775-0775 to speak with Attorney Thurow today.