Defending the Accused Across Pasco County, New Port Richey, and Beyond 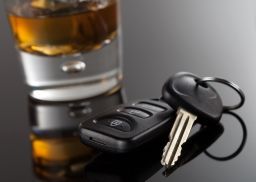 If you have been arrested for DUI, Thurow Law can also assist you with your driver’s license suspension and defend you in court. He has successfully represented numerous drivers at administrative hearings with the State of Florida Department of Motor Vehicle and Safety (DHSMV).

WARNING: You only have 10 days from your DUI arrest to request a hearing, so act now. Start with a free consultation to discuss a plan of action with Attorney Thurow.

Prior to becoming a criminal defense & DUI lawyer, Attorney Thurow was a police officer for more than 10 years. There are very few DUI defense lawyers in the State of Florida that have the level and type of experience in the area of DUI law as Attorney Todd Thurow. As a police officer, he was trained by the National Highway Traffic Safety Administration (NHTSA) in the administration of field sobriety exercises and Horizontal Gaze Nystagmus (HGN). Mr. Thurow was also trained and permitted to administer breath testing on the Intoxilyzer, the breathing testing instrument used statewide in Florida. More importantly, he has experience as the lead investigator in numerous DUI investigations that resulted in the arrest and prosecution of DUI drivers. Now, as your Pasco County DUI attorney, Mr. Thurow will aggressively utilize his knowledge of DUI investigations, police procedures, and his unique background to your benefit and obtain the best possible outcome in your DUI case.

Florida DUI penalties are strict, even for first-time offenders. If you plea “no contest” or “guilty” to a DUI charge, the judge MUST adjudicate you guilty. Judges in Florida do not have the discretion to lawfully withhold adjudication on DUI charges. That means you will be convicted and have a criminal record forever. In addition, if you get convicted of DUI in Florida you cannot get the case, or any case, sealed or expunged from your record.

This means that the charge will be permanently on your criminal history. It is important that you retain a Pasco County DUI attorney who understands the law that applies to your case and knows how to implement strategic procedures to your benefit. Thurow Law is dedicated to fighting for the best possible outcome and minimizing the collateral effects on your life.

Under Florida implied consent law, all drivers are required to submit to chemical testing of their blood, urine or breath if they are lawfully detained for DUI. If you refuse testing, you can face additional penalties on top of the penalties for a DUI conviction.

It is important to note that refusing testing can also be used against you at trial to prove culpability. If you have had a prior refusal violation, you can also be charged with a misdemeanor and penalized with up to one year in jail and/or a $1,000 fine.

Is a DUI in Florida a Felony?

In the state of Florida, a DUI can be a felony under certain circumstances. One circumstance that can cause a DUI to be a felony is if it is your third DUI offense within ten years.

Possible penalties for a third offense felony DUI include:

In order to help you understand the charges, and know what to do about a DUI arrest, our Dade City DUI law firm has created a helpful list of DUI FAQs. If you review the questions and still have some of your own, or you know you need a Dade City DUI attorney as soon as possible, feel free to contact our firm, Thurow Law, online or pick up the phone and call (352) 775-0775.

DUI FAQ – Your Questions are Answered

Pasco County DUI Attorney Thurow can meet you at the firm’s Dade City office for a free and confidential consultation. He can also meet you at the courthouse if he is in court. He regularly works seven days a week and routinely makes himself available in the evenings and on weekends for his clients and potential clients.

Thurow Law serves clients all across the west coast of Florida, including but not limited to Pasco County, Hernando County, Hillsborough County, Pinellas County, and Polk County.